A unique opportunity for European governments to reaffirm and strengthen their commitment to transparency.

Feb.20.– Accessing quality information has never been so challenging, despite or maybe, because of our exposure to tremendous amount of information. The entry into force of the Council of Europe (CoE) 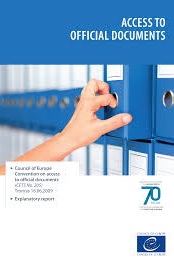 Convention on Access to Official Documents (Tromsø Convention) on 1 December 2020, in a context of concerning deficit of transparency in the management of the Covid-19 pandemic, appears as an opportunity for governments to reinforce transparency culture and restore citizens trust and legitimacy in their institutions, in democracy.

The Nordic European States pioneered the development of the right of access to official documents, with the world’s first law on access to information adopted by Sweden in 1766. It then spread progressively to many other West European countries, before reaching its peak in the 1990s with the creation of legal tools in the new democracies of Eastern and Central Europe. Today, various legal instruments (constitutions, national laws and jurisprudence) across Europe recognize the right of access to official documents. At the international level as well, this right has been increasingly recognized.

The CoE Convention on Access to Official Documents, signed on 18 June 2009 in Tromsø, Norway, is the first binding international legal instrument to recognize a general right of access to official documents held by public authorities. More than ten years later, on 1 December 2020, the Convention entered into force, following the ratification by Ukraine, tenth State to ratify it.