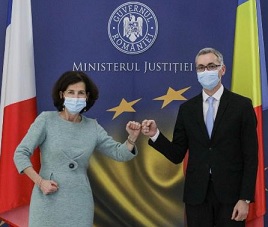 Bucharest, Feb.21.– The Minister of Justice, Stelian Ion, on Tuesday met with the French Ambassador to Romania, Laurence Auer, on which occasion they discussed the process of modifying the laws of justice, but also the Criminal Code and the Criminal Procedure Code.

According to a press release of the Ministry of Justice sent to AGERPRES on the 9th of February, Stelian Ion had a bilateral meeting with Laurence Auer, France’s Ambassador to Romania, the two officials discussing “the excellent bilateral cooperation” and the priorities of the French presidency of the Council of the European Union, which will have its debut on January 1, 2022.

The same source states that the Ambassador expressed the willingness of the French judicial authorities to strengthen cooperation with similar structures in Romania, both institutionally and within joint investigation teams. The Minister of Justice mentioned two areas of interest for expanding cooperation: the digitalisation of justice and environmental crime.

“The collaboration between our countries must not only concern purely judicial issues, but also a sustained exchange of good practices on issues of interest to both parties. The French system has been a source of inspiration for us for the last hundred years and, given the similarities to the two systems, we can cooperate extremely well, both bilaterally and within the European Union,” the Justice Minister was quoted as saying.
(...)

If men are not kept straight by duty, they must be by fear. The more they are kept by fear, the less they are free. The greater the strength of duty, the greater the Liberty.