A mob of some 300 people screaming, s 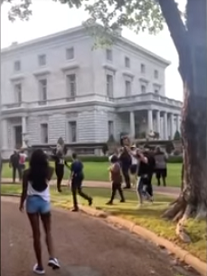 houting and playing drums broke into a private community and some of them advanced toward the McCloskeys' home as seen in the picture. The McCloskeys stepped out of their home brandishing firearms. See the video analysis of what really happened at the foot of this report."

St. Louis, July 30.– The couple charged with a felony for standing outside their home with firearms moved this week to disqualify St. Louis Circuit Attorney Kim Gardner after she allegedly referenced the case against the couple in campaign emails.

Gardner, a Democrat, charged the McCloskeys last week with felony unlawful use of a weapon for brandishing firearms as Black Lives Matter protesters congregated in front of their home.

“It is illegal to wave weapons in a threatening manner at those participating in nonviolent protest,” she said in a statement.

Shortly before and after filing the charges, Gardner’s campaign sent out fundraising emails that referred to the circuit attorney’s attempted prosecution of the couple, attorney Joel Schwartz said in new court filings. Schwartz is representing the McCloskeys, who are lawyers.

An email said to have been sent to supporters of Circuit Attorney Kim Gardner just before she filed charges against Mark and Patricia McCloskey. (Court Filing)

In one email, Gardner’s campaign allegedly referenced comments made by Missouri Gov. Mike Parson, a Republican, who said that President Donald Trump “understands the situation in Missouri, he understands the situation in St. Louis and how out of control it is for a prosecutor to let violent criminals off and to not do their job and try to attack law-abiding citizens.”
(...)