US Attorney General William (Bill) Barr committed an absolute heresy to modern ears when he said that “moral values must rest on authority independent of men’s will. They must flow from a transcendent Supreme Being.” This can’t be right! yelp the modernists. We get to decide those things, not some unelected Supreme Being! Religion sounds just as bad as the Electoral College, which is why we need to get rid of both! cry the relativist cadre. The mainstream press and the social media reaction makes the US Attorney General's statements appear as offensive in his speech at the (Roman Catholic) University of Notre Dame last week. Yet the A.G. was simply spelling out the reality of life...

Bill Barr Is Right. That’s Why He Terrifies the Left 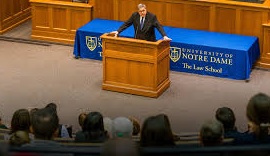 Attorney General William Barr was excoriated by the mainstream press and the social media offenderati for his speech at the (Roman Catholic) University of Notre Dame last week. Yet the A.G. was simply spelling out the reality of life in modern America: here is what we have lost, here are the reasons why, and here’s what’s happening as a result. We won the American Revolution, but we lost the sexual revolution—with all its attendant debasement.

Those responsible for the loss seem incapable of recognizing the sequence of cause and effect spelled out by Barr. Journalists who have specialized in providing rationalizations for the release of our unbridled passions are clueless as to the magnitude of our national decline. That’s to be expected: they are symptoms of it. They thought the moral pigpen they were playing in was cost free; when the hefty bill arrives, they blame the waiter and try to bolt (“I don’t remember ordering two filet mignons, La Madeline au Truffle, or the Château Latour.”).

But this isn’t the waiter’s fault, and nor is it Barr’s. It’s the “fault” of reality, which rudely intrudes into their fantasies. No, Toto, we are not in Oz anymore. You may not like moral reality, but it exists without your permission. In fact—and here’s the most infuriating part—it doesn’t need your permission. Rather, you need its permission, or all kinds of bad things will happen to you, like the ones Barr spelled out as the “real-world consequences” of “the campaign to destroy the traditional moral order.”

Then Barr doubled down. Quite aside from religion, he said, “From the nature of things we can, through reason… discern standards of right and wrong”—and here come those hurtful words again—“that exist independent of human will.” The liberal mind begins to reel: there has to be an out from this somewhere; otherwise we’re cornered ...