So far this century, the press seems to concentrate almost exclusively on negative news with an increasing yellow tone. Read here → "Four good news stories you might have missed"

As cities such as Seattle and Minneapolis, and states including California and New York, have adopted a $15-anhour minimum wage, the negative consequences have hit small businesses and lowskilled workers the hardest. 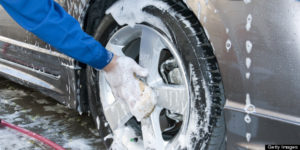 Unions and politicians have spent the last decade trying to fix prices and pressure shops to unionize. The result: a flurry of closed businesses, a spike in car-wash automation, decreased consumer options, and a black market in hand car washing services.

“After six years, organizers have unionized 11 businesses, or about four percent of the city’s registered car washes,” writes Jim Epstein in Reason magazine. “Two of them have since closed down, and the union withdrew three more because of a lack of support from the workers.”

The reason for the lack of traction? Workers seem to be largely content with their situation and struggle to see the value of union membership.

“Protection from whom?” asks Ervin Par, a car washer, who emigrated from Guatemala. “If I don’t like working here, I’ll go find a job at a different place. There are many places to work where they pay the same.”

Ultimately, the union’s efforts to champion the $15 minimum wage succeeded through politics, and local businesses began adapting – by closing their doors or laying off workers following automation.
One of those is Best Auto Spa, located at 810 Pennsylvania Avenue in Brooklyn. “The $15 minimum wage means that this business model is no longer viable,” Epstein writes. “Two years ago, [the owner] installed $200,000 worth of equipment, which allowed him to lay off eight workers.”

Automation can be good and productive, both for workers and consumers. But when the driving reason is not consumer feedback, the delivery and quality of services shift based only on the whims of the policymaker. The material pains include increased unemployment and shuttered businesses. And the poor bear the brunt.

I hate quotes. Tell me what you know.

Regnery Publishing Sept. 29, 2020 256 pages Available in Barnes & Noble A closer look at the Supreme Court by LINDA WIEGENFELD “Equal Justice Under Law”: These words, written above the main entrance to the Supreme Court...