The draft constitutional reform proposed by the Cuban Government, entitled "Proyecto de Constitución de la República de Cuba", has not respected the usual democratic procedure that allow its citizens in exercising their rights and sovereignty to elect those who are going to represent them in a constituent assembly when it comes to drafting a new constitution. In this case, the procedure has been to draw up a text published by the Asamblea Nacional del Poder Popular (National Assembly of People's Power), the so called legislative body who adopted it unanimously after two short days of discussions. This text had been prepared by a Commission presided over by Army General Raúl Castro Ruz. The Commission presented a draft new constitution to the seventh plenary of the party's Central committee and the Council of State, before submitting the text already drawn up to the National Assembly. The text thus drawn up, approved by the regime without political participation or pluralism, will be subject next February to what is merely a consultation controlled by the State apparatus under the leadership of the Communist  Party and without a participatory and pluralistic national debate through 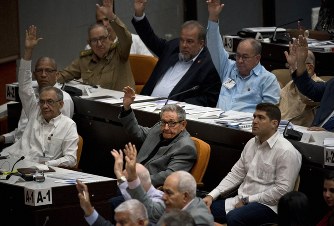 a mechanism that facilitates divergent views and proposals.

Havana, Dec.25.– Cuban lawmakers Saturday unanimously approved a revised draft of a new constitution that retains the island’s one-party socialist system but reflects its socio-economic opening since the fall of the Soviet Union.

The draft new constitution, which has 229 articles and will replace a Cold War-era one, will maintain the Communist Party as the country’s guiding force and the state’s dominance of the economy, according to state-run media. A copy has not yet been distributed to the public.

The document, however, also legitimizes private business that has blossomed in the last decade, acknowledges the importance of foreign investment and opens the door to gay marriage, according to state-run media.

It imposes age and term limits on the presidency, after late revolutionary leader Fidel Castro and his younger brother Raul Castro ruled the country for nearly six decades, and introduces the role of a prime minister.