Is Donald Trump the lone character to blame for the attack on the Capitol on January 6, 2021? I wouldn’t be too surprised if a fair and transparent Congressional procedure proves that President Trump has made serious mistakes in his frantic attempts to overturn election results in those States where he claimed fraud had occurred.

These errors must be proven through due process in a Congressional Committee comprised of members chosen by both parties independently, and where both the prosecution and defense witnesses were cross-examined in accordance with fair rules for both parties.

In fact, so far in the one-sided proceedings, it appears that the Select Committee to Investigate the January 6th Attack hearings have presented powerful and compelling evidence that President Trump failed to act as he should have to curb his supporters and prevent further violence.  Unfortunately, the Select Committee only has accusers among its members. They are all part of the prosecution. Absolutely no one in the defense role. Not even the two Republican Representatives handpicked by Speaker Nancy Pelosi against 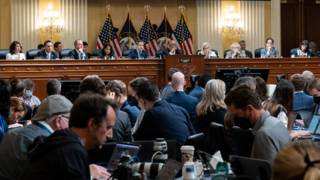 the wishes of that party, which had previously selected five members to join the Committee but were vetoed by the Speaker. Nor has a single witness appeared to testify in favor of President Trump or to at least point to some mitigating circumstances. Is a fair trial possible in such circumstances?

This is not the proper way to proceed in cases as serious as this. In any court of law, even the most murderous criminal has a lawyer who looks for favorable witnesses, conducts cross-questioning with the accusers, and ultimately seeks justifications and mitigating circumstances.

It is very important to me to know the truth. It's important to all of us! It is essential that Trump's serious mistakes be duly demonstrated. But it is not necessary to exaggerate, much less lie to achieve that goal. Are readers aware that the January 6th. Select Committee keeps saying that "an armed mob attacked the Capitol?"; even the Republican(?) Representative Cheney, now presiding over the Committee, keeps repeating this claim. Do readers know that the Democratic Party Representative that had been presiding the Committee R-Rep. Liz Cheney(now in Covid quarantine) spoke from his seclusion affirming that the "armed mob" had killed policemen (In plural! How many?... I wonder). Wow!

All these lies are being told in public. After hammering them so much into the consciences of citizens listening to them, there will be many believers venting their hate in a process dividing the country!!!

The problem is that the conclusions reached by the Select Committee using these shady tactics are not credible: they turn into a political witch hunt. Why not follow due process in search of the truth? A process capable of examining both sides of the coin? Is it perhaps a sign of desperation in the face of the overwhelming electoral defeat they are anticipating in the legislative contest just 4 months away next November?

If so, they are making a serious mistake, because most citizens, even Democrats, will not approve or consent to these methods.

As a US citizen of Cuban origin who votes for Republicans or Democrats according to their qualities, I am deeply disturbed by these condemnatory methods and tactics, because I find reminiscences in this political trial of the circus trials that have been taking place in Cuba for 62 years, where even the defendant's attorney usually accepts the prosecutor's arguments and fails even to present witnesses to justify the accused or declare him innocent or at least sow the seeds of doubt.

Let's hope these angry politicians in the US Congress reconsider in time and desist from these shady and dictatorial methods, opting to return to the legal and political stability that the US had enjoyed for so long. It would be disastrous to continue down this path, not only for Democrats but for the country as a whole.

back to top
If the machine of government is of such a nature that it requires you to be the agent of injustice to another, then, I say, break the law.
Henry David Thoreau

We have 627 guests and no members online