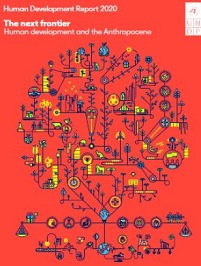 Hidden in the long shadow of Covid‑19, 2020 has been a dark year. Scientists have been forewarning a pandemic like this for years, pointing to the rise in zoonotic pathogens— those that jump from animals to humans — as a reflection of the pressures people put on planet Earth.

Those pressures have grown exponentially over the past 100 years. Humans have achieved incredible things, but we have taken the Earth to the brink. Climate change, rupturing inequalities, record numbers of people forced from their homes by conflict and crisis — these are the results of societies that value what they measure instead of measuring what they value.

In fact, the pressures we exert on the planet have become so great that scientists are considering whether the Earth has entered an entirely new geological epoch: the Anthropocene, or the age of humans. It means that we are the first people to live in an age defined by human choice, in which the dominant risk to our survival is ourselves.

For example, the actions of an indigenous person in the Amazon, whose stewardship helps protect much of the world’s tropical forest, offsets the equivalent of the carbon emissions of a person in the richest 1 percent of people in the world. Yet indigenous peoples continue to face hardship, persecution and discrimination.

Four thousand generations could live and die before the carbon dioxide released from the Industrial Revolution to today is scrubbed from our atmosphere, and yet decisionmakers continue to subsidize fossil fuels, prolonging our carbon habit like a drug running through the economy’s veins.

It is time to make a change. Our future is not a question of choosing between people or trees; it is neither or both.

When the Human Development Report first challenged the primacy of growth as the measure of progress in 1990, the Cold War still shaped geopolitics, the World Wide Web had just been invented and very few people had heard of climate change. In that moment UNDP offered a forwardlooking alternative to GDP, ranking all countries by whether people had the freedom and opportunity to live a life they valued. In so doing, we gave voice to a new conversation on the meaning of a good life and the ways we could achieve it.

Thirty years on, much has changed, but hope and possibility have not. If people have the power to create an entirely new geological epoch, then people also have the power to choose to change. We are not the last generation of the Anthropocene; we are the first to recognize it. We are the explorers, the innovators who get to decide what this— the first generation of the Anthropocene —w ill be remembered for.

Will we be remembered by the fossils we leave behind: swaths of species, long extinct, sunken and fossilized in the mud alongside plastic toothbrushes and bottle caps, a legacy of loss and waste? Or will we leave a much more valuable imprint: balance between people and planet, a future that is fair and just?

The Next Frontier: Human Development and the Anthropocene sets out this choice, offering a thought‑provoking, necessary alternative to paralysis in the face of rising poverty and inequalities alongside alarming planetary change. With its new, experimental Planetary pressures–adjusted Human Development Index, we hope to open a new conversation on the path ahead for each country — a path yet unexplored.

The way forward from Covid‑19 will be the journey of a generation. We hope it is one that all people will choose to travel together.

We have 870 guests and no members online