‘I hope and pray that the Prime Minister can really put his declarations of intent into practice, since as religious minority in Pakistan we need the protection of our people and places of worship’.– Bishop Samson Shukardin OFM

Christians suffer from institutionalized discrimination, illustrated by the fact that occupations seen as low, dirty and derogatory are officially reserved for Christians. Many Christians are very poor, and some are victims of bonded labor. There are also many Christians belonging to the middle class, but their economic status doesn’t save them from being marginalized or persecuted. The country’s notorious blasphemy laws target religious minorities (including Muslim minorities), but affect the Christian minority in particular, not just the poor.

Christians in Pakistan are dwindling since 2005 under islamic rule to less than 2.5 million or less than 1.5% of the population; 1.4 million are Catholic. Many have emigrated to Europe; most of them to England. 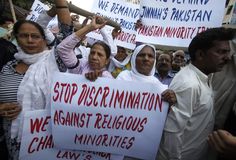 Islamabad, Aug.2.– “The speech of Prime Minister Imran Khan is very encouraging and gives new hope to the religious minorities living in Pakistan. In the past also the leaderships said such nice words but were not able to fulfill them.” This is what Bishop Samson Shukardin OFM, at the head of the Catholic Diocese of Hyderabad said to Fides News Agency. “We were born and brought up in Pakistan,” added the Bishop, “but we still do not get equal rights, it is a sad reality. I hope and pray that the Prime Minister can really put his declarations of intent into practice, since as religious minority in Pakistan we need the protection of our people and places of worship.”

The Franciscan bishop declares, however, that he appreciates the initiatives and provisions that the government led by Imran Khan is already implementing for the benefit of religious minorities.

In his speech at the meeting held on July 29 at the Presidential Residence in Islamabad to celebrate in advance Minorities Day – a celebration that will be celebrated on August 11th in the rest of the country – Imran Khan stressed that it is obligatory for Muslims to “provide protection to the people of religious minorities and provide them their basic rights, freedom, and justice. We have to learn from the time of Madina, 1400 years ago, how our Prophet Muhammad treated the minorities living in the state. We must follow Prophet Muhammad’s approach with minorities. He formed a welfare state that was promoting compassion, humanity, justice, and rights for everyone."

Imran Khan also added that in Islam no practice comparable to forced conversions is conceivable, since “God asked his messengers to spread the message, accepting it and becoming a believer is a free will of the person. We cannot force anyone to accept Islam under the threat of arms or persecution or forcing religious minority women to convert after they have been kidnapped. Such acts cannot in any way be considered compatible with Islam. And those who work to convert people by force, kidnapping them or subjecting them to threats, show that they have no correct understanding of Islamic teachings” ...