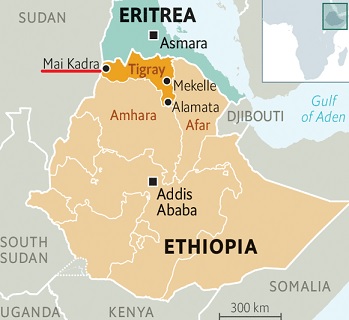 members of the rebel Tigray People’s Liberation Front (TPLF) were behind the mass massacre in Mai-Kadra in November last year, killing more than 1000 ethnic Amhara people in a prearranged attack.

In a joint briefing, authorities of the two government offices said the perpetrators had committed ethnically motivated, widespread and systematic attacks, going house to house and killing ethnic Amhara civilians.

According to the officials, entry checkpoints of the Mai- Kadra town in north west of Ethiopia were closed two weeks ahead of the massacre and the attackers, assisted by local security members, had forced the victims to stay at home until they were stabbed, strangled and shot to death.

The officials said police uncovered 117 burial grounds including mass graveyards in different places of the town and finalized investigations on the massacre.

Federal police said 36 of alleged perpetrators of the massacre have been apprehended so far as the manhunt for other criminals continues.

back to top
Tweet
It is the mark of an educated mind to be able to entertain a thought without accepting it.
Aristotle (384 BCE - 322 BCE)