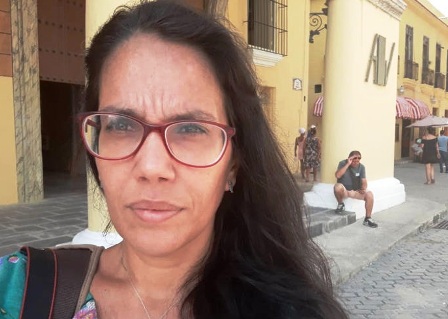 Beginning on November 16, authorities have repeatedly barred Escobar, a reporter for the independent Cuban news website 14yMedio, from leaving her home in Havana, according to news reports and tweets by Escobar.

On November 16, Escobar tweeted that a security agent was standing at her doorway and would not allow her to leave unless he accompanied her. She posted similar tweets on November 23, November 25, and December 10.

Escobar told CPJ in a phone interview that authorities often prevent independent journalists from working on “significant dates” either by detaining them or stopping them from exiting their homes. She called the practice “random house arrest, without any process,” and said that she has not been made aware of any charges filed against her.

“Physically barring a journalist from leaving her home is a blunt and ugly form of censorship,” said CPJ Central and South America Program Coordinator Natalie Southwick in New York. “Cuban authorities must allow Luz Escobar to move as she wishes if they want to even pretend that they care about opening up free expression in the country.”

On November 17, independent Cuban blogger Yoani Sánchez also tweeted that she had recently been barred from leaving her home, and on December 10, Abraham Jiménez Enoa, editor of the digital news magazine El Estornudo, tweeted the same.

November 16 was the 500th anniversary of the founding of Havana, according to news reports. November 25 was the third anniversary of Fidel Castro’s death, and December 10 was international Human Rights Day, Escobar and Enoa noted in their tweets. In her November 23 tweet, Escobar asked “is anyone aware of what is happening today?”

In her November 25 tweet, which included a video, Escobar said that the agent at her door said he was following orders and threatened to detain her if she went out.

back to top
Tweet
If the machine of government is of such a nature that it requires you to be the agent of injustice to another, then, I say, break the law.
Henry David Thoreau