The World Movement for Democracy is concerned to learn about the widespread repressive actions taken by the Azerbaijani government in response to peaceful protests on October 19-20, 2019. These measures include arbitrary arrests, police brutality, and an internet and mobile shutdown. Such actions show the government’s flagrant disregard for its citizens’ basic human rights, including the right to peaceful assembly, the right to access information, and the right to free expression. We join organizations around the world in reminding the government of Azerbaijan of its international obligations to uphold these basic human rights. 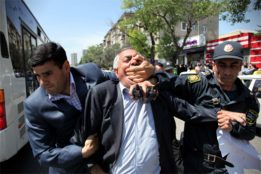 Oct.22.– Prior to the protests, the government preemptively arrested and charged two protest organizers with politically motivated criminal cases. Additionally, organizations estimate that anywhere between 60-100 people were detained during the October 19 protest against political imprisonments and the country’s repressive government. Many videos show violent treatment of protesters, who are visibly unable to defend themselves, by police. In a separate protest regarding violence against women on October 20, police engaged in similarly brutal tactics.

In its statement, Civil Rights Defenders notes that “many of those detained have not been permitted to meet with a lawyer and are being held incommunicado after being sentenced to administrative arrest for 15 or 30 days – a tactic the Azerbaijani police have used in the past to hide physical evidence of torture.” One protester reported being denied medical care for a broken rib while in detention, and another activist reported that he was beaten unconscious while in custody.

In light of these actions, the World Movement calls on Azerbaijan to immediately release all detained protesters. As the government continues to violate its obligations under the European Convention on Human Rights, we urge the Council of Europe—of which Azerbaijan is a member—and its member states to hold Azerbaijan’s government accountable for its actions. Additionally, as the European Union (EU) negotiates a Partnership and Cooperation Agreement with Azerbaijan, which would provide the country increased access to EU markets, we urge EU member states to weigh Azerbaijan’s dismal human rights record heavily during negotiations. The lives and dignity of citizens in Azerbaijan remain on the line, unless the international community speaks out together.